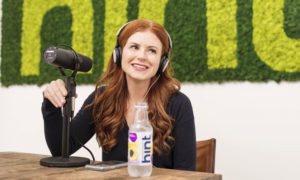 Kara Goldin is the Founder and CEO of Hint, Inc. – makers of Hint Water, the leading unsweetened flavored water. She is also the bestselling author of Undaunted: Overcoming Doubts and Doubters, which was released October 2020.

Kara’s career has seen her in magazine circulation for Time Magazine, Sales for CNN, and as a VP for AOL before founding Hint. Her accolades include being named one of InStyle’s Badass 50, Fast Company’s Most Creative People in Business, Fortune’s Most Powerful Women Entrepreneurs, Fortune’s Most Innovative Women in Food & Drink, and EY Entrepreneur of the Year for Northern California. The Huffington Post listed her as one of six disruptors in business, alongside Steve Jobs and Mark Zuckerberg.

We spoke about her book, the fact that it was released during the pandemic, how the passing of her editor at the same time, all while having 5 kids, and running her business has impacted her. Kara told us how being curious from an early age helped her with problem-solving and really helps her not only stand on good footing with her employees, but also helps motivate her every day to continue to learn and grow.

Kara spent much of her childhood in Arizona, graduated from Arizona State University, and currently lives in the bay area. She shares her knowledge and experience through public speaking, mentoring, and hosting her own podcast, The Kara Goldin Show.

Books that she recommends are Superman’s Not Coming by Erin Brockovich, Originals by Adam Grant, and Can’t Even by Anne Helen Peterson.

You can buy her book Undaunted: Overcoming Doubts and Doubters here.

PreviousInterview with Karen DiMarco Next An Incredible Journey with Kip Brooks